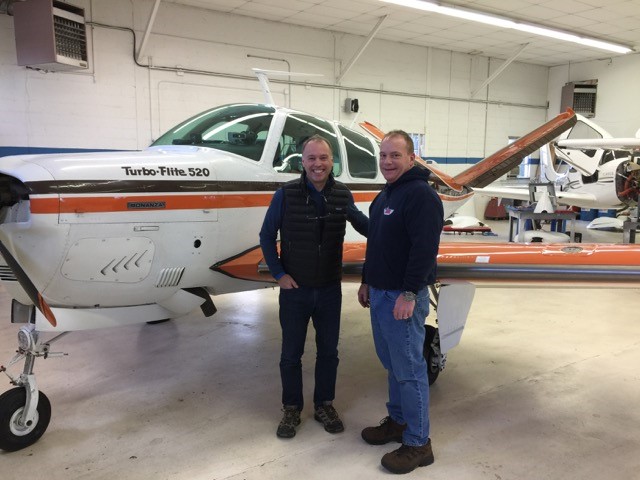 My father was a senior engineer at De Havilland Aircraft. I grew up immersed in airplane talk, hanging around and flying in Beavers, Otters, and Twin Otters, and the like. Dad’s influence made aviation a big part of my life and that of my family. In fact my nephew—his grandson—recently graduated from captain on De Havilland Dash-8’s and Q400’s to right seat on a 767 for Air Canada. He and I fly together whenever we can. He always has something to teach his uncle!

I have nothing but good things to say about the entire experience at Lincoln Park Aviation. Frank Galella and his team were straightforward and transparent at every step, on time, accommodating of my schedule, and simply a pleasure to deal with.

The New Jersey location is a little closer to me and easier to get back and forth. Frank was very flexible on the dates and made it work for me. He predicted a finish time that was correct within about 48 hours, which was amazing, considering it was a month-long project. He worked the annual and propeller overhaul into it as well, so there was quite a lot of work to be done.

The TKS system looks like it was integrated from the blueprints and has been on the aircraft forever. The fit and finish is wonderful. There are a couple of tricky spots on the Bonanza which were covered seamlessly. The attention to detail, the touch up paint around the windshield where the spray bar had to be fitted and refinished was beautifully done. The quality of the work done is beyond merely excellent, it is essentially perfect.

It was the only ice protection system available for the Cessna 182 and Mooney that I owned. Having flown with the system, I have a lot of comfort in its ability to protect against ice accretion and a variety of different kinds of icing which includes large droplet and runback situations.

The main thing is that it protects the whole airfoil.  For me it’s very reassuring to see the fluid streaming back across the flying surface of the wing, knowing that not just the leading edge but the flying surface is also protected. With boots, you can see leading edge ice building and take steps to address that, but I think where people can get fooled is missing the development of runback icing, which can be just as critical as leading edge icing.  I also like the fact that the combination of the spray from the prop and the windshield spray bar tends to clear the entire windshield. On the 182, the windshield spray only came from the prop. But both the Mooney and Bonanza have dedicated windshield spray bars. Combined with the prop spray, you can clear most of windshield; you’re not looking through a small plate that may not be where you want to look. It changes the visual game a lot. You don’t lose your field of view.

The TKS system has made the mission predictable. Granted, in a single-engine piston aircraft I’m not going to depart into known icing regardless of whether a system is FIKI or not. But known icing is relatively infrequent; having TKS protection has made me comfortable flying in potential icing where, in combination with turbo-charging, I can pick my cruise altitude. With the very large fluid reservoirs in the Mooney and Bonanza, the airplane maintains normal aerodynamic wing and propeller performance to escape icing conditions by climbing or descending. Whereas in an unprotected or non-turbocharged aircraft, the last thing one should try is to out-climb ice. So turbocharging plus TKS makes for a very functional combination, and I don’t often have to cancel trips due to ice.

I’ve never been in ice that overwhelmed the system. In a retractable gear airplane, if the TKS system is working, the signs that you’re in icing conditions are more subtle than you might have flying an unprotected wing, a wing with boots where the ice builds between boot cycles, or even in a high wing fixed gear plane where ice visibly accumulates on the gear. The system is so good you just don’t see much; you do see some frosting or a thin layer of slush on the leading edge of the aircraft’s wing, but not much else. I’m also quite liberal with system use and haven’t been put in a position where I’ve had to use it to de-ice. If I’m flying into visible moisture and it is colder than 4 degrees C, I turn the system on. Essentially, I turn it on when I turn on the pitot heat.

My first airplane with the TKS system was a Cessna T182T. It was installed when your company was in Salina, Kansas. Great install. The system was more limited because of the smaller reservoir, the absence of a windshield spray bar, and the inherently lower performance of the 182. But it was an airplane that I didn’t try to use predictably in the winter.

I then got a Mooney Bravo that had FIKI certified TKS (Flight Into Known Icing) installed at delivery of the aircraft, and flew that until about three years ago. I got used to a different level of performance in the Mooney, and to a new level of predictability flying with the FIKI  system. I had many encounters with light ice, and a few with moderate ice over the years, all handled very nicely by the Mooney system.

With the Bonanza I realized that the TKS system wasn’t going to be FIKI but felt that I had enough flexibility with my travel dates and times that I could manage with a robust non-FIKI system. The Bonanza system is about as robust as you can get without being FIKI— a very big 7 gallon reservoir, a separate windshield pump, and in a retractable with an airframe, wing and useful load that’s inherently forgiving.