Michael Murray lives in northern New York. He makes business trips throughout New York State, the Midwest, the South, and southeast Atlantic states. For pleasure, he flies all over the country with his family, including Alaska. Michael owns a 1995 Beechcraft A36 Bonanza equipped with inadvertent TKS Ice Protection, which he has been flying for 4.5 years. 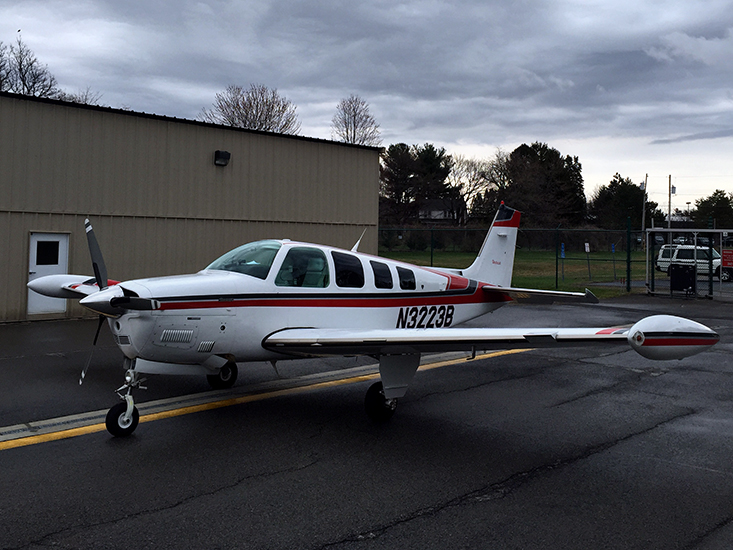 In 1968, I started flying. Two years later I received my pilot’s license, I flew for about five to six years, then began a family, and with the expenses did not start flying again until the mid 1990s. I had a home on The Outer Banks of North Carolina. My wife wanted a quicker trip so encouraged me to get back to flying. It was a lot easier to fly there than drive. After I retired from New York State, I used the plane extensively for business. I bought my current plane in late 2013.

There are a limited number of options available. You can get boots, TKS or the Kelly Aerospace system. The Kelly system is not really on many airplanes, so it’s either TKS or boots. I like the TKS because it does a nicer job of keeping ice from forming on the plane in the first place than the boots do. When TKS is turned on and is flowing, which takes about 15 minutes to completely flow, it does an excellent job of keeping inadvertent ice off the plane. I proactively turn the system on whenever there are winter conditions and I may go into IMC. I also let the fluid flow whenever I may be flying through the clouds.

I have had almost 100% dispatch in the winter for planned trips. That pretty much tells it all. I can mostly fly when I want to fly. Most of my flying in the winter is in the clear between layers or on top, and only a small part of the trip is in IMC. Only a small amount of the IMC might result in icing. I plan flights around areas of potential icing. TKS provides an escape and time if I do encounter icing.

There are times you believe it’s improbable that you’ll have ice and you get a little bit or a lot. For the most part, my winter flying has been ice-free, however. One time on an approach I had 2.5 to 3 inches of quick accumulating unexpected ice on the wingtip tanks and on the point of the prop spinner, with very little ice or slushiness on the wings because the TKS was on. Very rarely do I turn on the windshield spray bar. The sling from the prop usually keeps the antennas and windshield clean if there is any icing. When the TKS is on there is usually never any icing.

The nice thing about boots is that you don’t turn boots on until you have ice. The bad thing is that they don’t keep the wings as clean as TKS does. Boots don’t protect the windshield or airframe, either. You have to have a separate system for your prop, which is electric or heated. TKS is better.

If you do get ice unexpectedly, the TKS system gives you time to get out of the icing conditions until you can get to a place where it’s safe. It’s a good system. It works.

I was iced up a few times in my Mooney without ice protection. It was very scary. One of the requirements the second time I looked to buy a plane was TKS. I was looking for a TKS equipped Columbia/Cessna 400, a turbo Cirrus SR22, or a Beechcraft Bonanza. The Bonanza was first choice because of the room in the plane. Fred Braunstein, the former owner of my current plane and a friend of mine, had the TKS installed on the Bonanza. Fred was selling his plane and it came up first, and that’s why I chose it. But whatever plane I bought had to have TKS because of the potential icing situation we have in the northeast.

Just about anybody who flies in the northeast or Great Lakes in the winter would benefit from having TKS. I’m sure it’s very similar in other parts of the country or in Canada because I’ve had icing over B.C. in the summer. Anybody working in the northern latitudes where there are clouds and temperatures below 0 degrees could benefit.